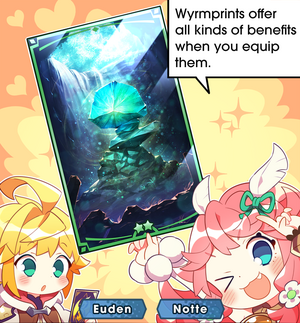 Wyrmprints are card-like pieces of equipment that can grant additional abilities and stats when equipped.

Each adventurer is able to equip up to 5 wyrmprints, depending on the slots for their weapon. These slots are divided between

Some wyrmprints have access to an Affinity, which will grant additional abilities if enough prints of that Affinity are in the adventurer's loadout. Affinity bonuses are not subject to the usual wyrmprint stat caps mentioned above.

How do I get Wyrmprints?Edit

Wyrmprints tend to be available in 3 ways:

Eldwater in the Shop - This is the primary method that you will use to get Wyrmprints. Every print except for limited ones will be available to purchase in the shop, in exchange for Eldwater. Cost varies depending on a Wyrmprint's Rarity, as listed below.

2. Event Rewards - Events will often give out Wyrmprints as endeavor rewards, and several of these prints are only obtainable during their event specifically. The quality of these prints can vary widely, but they're relatively easy to get, and are cheap to upgrade.

How do I equip Wyrmprints?Edit 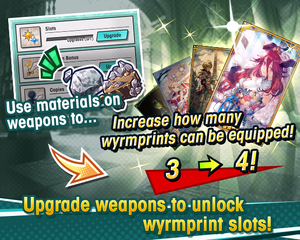 Wyrmprints are equipped into the slots on your current weapon. These slots are split between

prints). The amount and type of slots available will vary by your weapon, and you may need to unlock a slot with materials. The Weapon Crafting article has some more details. 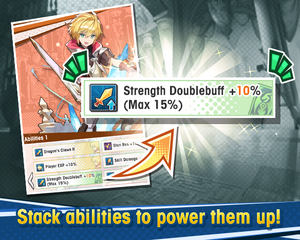 Equipping multiple wyrmprints that grant you the same stat will cause them to stack together, up to that effect's cap. The caps don't care about how you got the effect, they only care about limiting the final effect you gained. For example, equipping

Generally, you want to avoid overcapping a specific stat, as that ends up wasting a slot you could have used on a different stat. 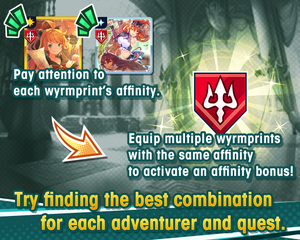 Some wyrmprints will have an Affinity, which will grant you a bonus ability if you equip enough of the same-Affinity prints. For example, equipping 2 prints with

Generally speaking, Affinity Bonuses are only worth getting if the required prints are useful in their own right. If you can get a Bonus, great, but if not, don't break your build for it. Especially don't equip a bunch of bad prints just to get an Affinity Bonus - it's usually not worth the trouble.

How do I upgrade Wyrmprints?Edit

You can upgrade prints in the upgrade menu, similar place as your weapons. There are 4 ways to upgrade your prints: 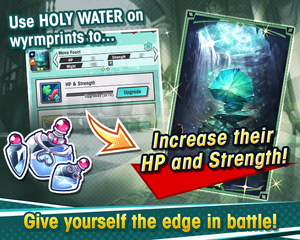 There is a maximum amount of upgrades allowed, depending on the rarity of a wyrmprint and the amount of unbinds it currently has:

Upgrading a wyrmprint costs Holy/Blessed/Consecrated Waters, with the type and amount needed per level varying by the wyrmprint's rarity.

These waters are generally not easily farmable, so you'll depend on event rewards to get them. This coupled with wyrmprints' stats not being very crucial anyway, means you shouldn't worry about this upgrade path until you approach the endgame. 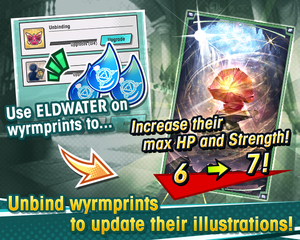 Unbinding - This is the most important upgrade path, as getting to 2 and 4 (max) unbinds will upgrade the wyrmprint's ability. The ability is pretty much the whole reason you'd want a print at all. Upgrading this costs Eldwater, with the costs varying by rarity and unbind count as follows:

You can also use

) to unbind your wyrmprints, at a cost of 1 key per unbind. Since the first unbind on a print is cheaper than the remaining unbinds, it's recommended to use keys on unbinds 2 - 4 to get the most value.

Copies - This allows you to equip the same print on multiple adventurers in a team, and any upgrades you make to the print will be cloned among these copies. Getting more copies costs Eldwater, but the catch is that you need a lot of Eldwater - usually enough to max unbind a print, just to buy one extra copy. Therefore, you should only consider additional copies after you have finished unbinds on a print. And even then, only get copies if you absolutely need them.

Augments - These items allow you to add some extra HP and Strength to your wyrmprints. These stat boosts are significant at the endgame, where every stat point counts - but before that point, they don't matter much. You can find more details as well as drop locations at the main Augments article

How do I get

There are several ways to obtain Eldwater:

1. Summoning - Summoning a duplicate Adventurer will give you some Eldwater instead, depending on their rarity:

2. Selling Dragons - you can sell unwanted Dragons by going to Teams -> Collection -> Dragons -> Part Ways. You'll get more Eldwater for selling higher-rarity dragons, however you should be careful not to sell something you actually need.

Sell values by rarity are listed below for 0UB dragons.

3. The Mercurial Gauntlet (monthly) - This is a mode where you can fight a stationary boss to test your damage output. You'll get a monthly payout of Eldwater among other things, with the amount increasing depending on how many Mercurial Gauntlet floors you have cleared. Also, you only need to clear each floor once, you don't need to repeat the process each month. The amount of Eldwater you get is hefty, ranging from about 30,000 for early-game players to over 90,000 at the high end. Try to pop into this mode whenever you get stronger, so you can improve your Eldwater income. 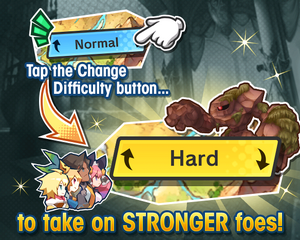 4. Main Campaign - Hard Mode - Completely clearing a chapter of the Main Campaign on Hard Mode will reward you with some Eldwater. Note that you can only get this once per chapter.

5. Events - Events, both limited-time ones and the permanent Event Compendium ones, tend to give varying amounts of Eldwater as well.

The information in this guide is intended to be used at either an introductory or mid-game level, to teach you generally what's good to use. End-game builds will sometimes consider things like Dragon, Co-Abilities, Chain Co-Abilities, and Shared Skills equipped on the character, but builds in this guide will usually not account for those. However, they will account for factors such as affliction punishers where applicable.

This guide will also assume that you have all 5 Wyrmprint slots unlocked on your weapon, for maximum build flexibility.

This guide is not going to list builds for every single unit in the game, as a lot of them come down to the following steps:

Note that some of the prints listed are limited, as in they were only available during specific limited-time events. These prints will be marked by an hourglass:

Non-limited alternatives will be suggested whenever possible, but some limited prints may be too unique to be replaced.

The general strategy with Wyrmprint builds on dps units is to follow the following priority:

When starting out, it is generally more important to build a varied collection of prints rather than max-unbinding (mub-ing) only a few. Having a mub dagger print won't really help your sword units, for example. Try to hold off max-unbinding until your collection has grown. The following steps can help guide you through this process:

These builds concern specific Roles, which can apply across several different weapon types, and are too general to be listed in Unit-Specific Builds.

Buffers can be identified as units who buff the team's stats on their skill 1. Their personal DPS tends to be rather low, so they want to focus on supporting the team rather than their own DPS. Examples of buffers include:

These builds are for general purposes depending on weapon type and affliction access. They should work at a basic level for most DPS units, but make sure to check the Unit-Specific Builds tab in case your unit has unique qualities.

These prints can be slotted into builds on multiple different weapon types, but may be dependent on specific content and strategies.

These prints don't necessarily follow the general build patterns, and are often custom-made to fit an adventurer's unique strengths.

This is a list of all notable updates made to this guide. Note that these updates don't always line up with game updates.