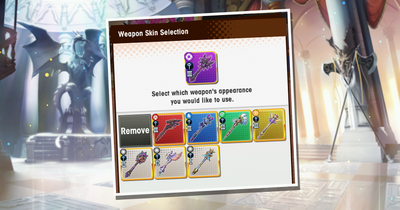 Weapon Skins is a feature that allows Adventurers to change the appearance of their equipped weapon. It was added in version 1.14.0.

During quests, an Adventurer may equip a skin over their weapon, giving it the appearance of another weapon. The stats, skills, and abilities of the "real" weapon remain unchanged - for all intents and purposes, this is purely a cosmetic feature.

On the teams screen and in co-op rooms, units with an equipped weapon skin will have a

blue eye icon displayed next to them. Tapping a unit in either place will then show the name of the "real" weapon in the unit's summary page.

Weapon skins can be disabled from view in co-op rooms by going to Game → Weapon Skin Display Settings in the More (Green Book) → Options menu.

There are three methods for unlocking skins:

A running count of the total available skins can be found below. Note that these counters include both playable weapons and skin-only weapons:

To equip a weapon skin, go to the teams menu, tap an adventurer's equipped weapon, and then tap the "Weapon Skins" button in the bottom-right to select a skin. Note that skins can only mask weapons of the same weapon type: for example, a lance can be masked by another lance, but a lance cannot be masked by a wand.

Swapping the "real" weapon to a different one will instantly unequip whichever skin was currently in use.

As a result of the weapon system overhaul in Version 2.0, many weapons now only exist as skins:

Several obtainable weapons are wielded by adventurers in their portrait art:

A few adventurers have weapon-skin-like effects on their weapons by default. Due to this, they are not eligible to use the Weapon Skin feature at all - the button in the teams menu doesn't appear.