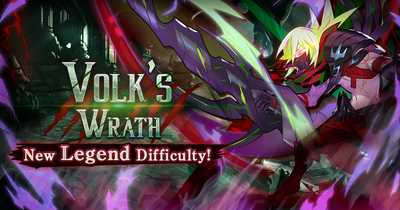 Volk's Wrath: Legend is a challenge quest centered on a boss battle with Volk, unlocked upon the completion of Volk's Wrath: Master, and meeting the minimum might requirement of 38,000.

HP isn't too much of a concern if adventurers are properly built with ideal equipment and maxed-out augments, a dispel is available, and a healer is used, which is highly recommended.

For Legend, at a minimum, adventurers should be equipped with at least a 6

Everyone must be equipped with a max-unbound 5

All adventurers should equip their standard wyrmprints in normal compositions.

The healer will be spending the majority of the match far away from Volk, keeping the wolves busy and providing healing and support where needed.

The general setup includes 3 DPSes, and a healer. The two requirements are as follows:

Plague is a special effect that will reduce an adventurer or Volk's resistance to afflictions.

Life Drain in Legend difficulty is much stronger; Volk will heal significant chunks of his health if he successfully hits a non-plagued adventurer.

Mitigate as much of his life drain as possible by avoiding damage, taking advantage of Plague, dragon form, and defensive buffs, and also dispel his Strength Up buffs ASAP.

Bracing (air recovery) grants iframes, but these iframes end as soon as you land. Not bracing will cause your adventurer to fall to the ground if they were hit by Snapping Squalls, which grant extended iframes that last until a few moments after they pick themselves back up.

Automatic Bracing is an option that can be configured in the Game Settings tab of the game's Option menu. Make sure that this option is turned off if you are playing a

Stun Res +100%Reduces susceptibility to stun by 100%. adventurer, as if automatic bracing is turned on, it's very likely that the unit will take damage twice - once from the initial hit, and another from getting hit again after landing from the same Snapping Squall. This usually ends poorly for the unit, as it is unlikely for most units to survive getting hit twice in a row without defensive buffs.

Unavoidable opening blast that deals low damage, but inflicts plague on entire team. The entire team should roll towards Volk here, after using any skills that may benefit them later (e.g. Agito buff skills), if they have

Volk will disappear temporarily after this attack.

At this point, everyone should be in the middle of the arena. All DPS units should spread out, preferably all in different directions.

Volk will reappear soon, and will look as if he's about to attack. The healer should stay put in the middle, and use their healing skill (preferably, a burst heal) just before he performs a spin attack. All other DPS units should try to prevent their plague rings from overlapping other units as the healer cleans it off.

In solo mode, Volk will spawn four affliction bombs that do not deal damage in a cross pattern.

In co-op mode, Volk will spawn six affliction bombs that do not deal damage in a hexagonal pattern.

In either case, Volk will then move to the center of the arena, then spawn 8 shurikens in an octagonal pattern.

These bombs can be safely detonated if you're not plagued (your healer should have cleaned it off by now) and you match resistance with the bomb's type.

Purple lines signifying shurikens' path, centering on one of the closest units to Volk, will appear after the octagonal burst has fired; be mindful of their paths, and don't get hit by them. These shurikens will inflict Sleep on units that do not resist Sleep.

Four unavoidable purple chaser attacks appear on every unit. Avoid overlapping each other.

Volk will pick the two closest units and drill towards them. Check the minimap - if Volk's pointing at your general direction, roll perpendicularly! Using skills or dodgetanking are acceptable, too.

Volk will inflict plague on all units again. All units should spread out to 4 corners, right to the edge of the arena; there's more than enough time to do so. Heal the plague off, once everyone is apart.

Volk will teleport behind adventurers and attempt a spin attack, which is unavoidable within the marker.

Volk will reappear at the center of the arena and promptly dispel any afflictions on him. Use any skills you have, preferably starting with a skill that inflicts

burn, or a skill that boosts the Dragon Gauge now.

Volk will create a black fog that covers a significant area of the arena, and walk towards the bottom-left corner. This black fog inflicts plague on anyone caught in it.

The designated baiter (usually the healer) should be at the upper-right corner, right at the edge of the fog.

Deal with this as the previous instance of Imminent Illness, but keep in mind that there are now also red markers representing wolves that charge, that track the ranged baiter, usually a healer that strike them. The baiter should make sure that they aren't caught between two attacks at the same time.

Volk should have his HP empty out by this point, if not much earlier. Phase 2 will begin once this happens.

Map-wide avoidable attack that deals little damage, and inflicts Plague, or HP to 1

Poison if the target is already plagued.

Adventurers that are plagued should iframe or dodge roll the attack. In slower runs, the actions should be as follows.

Volk will charge towards the furthest adventurer. The targeted adventurer should get out of harm's way in any way, and DPS units that don't have any skills should roll towards Volk's destination.

Volk will then follow up with two or three claw swipes, targeted at the closest unit. Skill, dodge, or get to the blind zone.

This move tends to show up on slower runs.

Volk will cause massive unavoidable damage and heals based on the amount of damage dealt.

This move is seen once Volk's remaining HP has reached below 90%.

Volk will summon wolves that charge at adventurers, as well as buffing his own strength by 30% (two stacks of 15%).

If the wolves were all defeated, Volk will respawn them automatically at certain points in the fight.

Here, the action varies depending on the adventurer is plagued or not.

This move tends to be skipped in very fast runs.

In solo mode, Volk will spawn two black affliction bombs directly to the left and right of him.

In co-op mode, Volk will spawn four black affliction bombs in a cross pattern next to him.

Poison if the target is already plagued.

Volk will also buff his own strength by 30% (two stacks of 15%) shortly after the bombs spawn.

This move tends to be skipped in fast runs.

This move tends to show up in slower runs.

Volk charges four times, targetting one adventurer each. This can be iframed or dodge rolled.

This move is seen once Volk's remaining HP has reached below 75%.

Volk will summon a Blood Moon which unlike in lower difficulties, is untargetable. This Blood Moon still constantly deals small amount of damage, and life steal fills up a red bar located to the bottom right of the HP bar. When this bar completely fills, the Blood Moon will fall and deal 99999 damage to all adventurers, ending the run.

During Resentment, Volk's claw swipes now cannot be iframed or dodge rolled, so moving into the blind area is now the only method of dodging this attack.

Volk will move towards the center of the arena and then summon four purple chasers that track units. All four units should fan out to the edge of the arena, and then rotate in a clockwise direction.

In solo mode, Volk will spawn four affliction bombs in a cross pattern.

In co-op mode, Volk will spawn eight affliction bombs in an octagonal pattern.

Volk summons four tornadoes in a cross pattern which bounce off the edges of the arena.

Berserk mode, all of his attacks will be significantly powered up, and his affliction resistances will be set to 999% - making it impossible to inflict further afflictions.

Volk's defenses will also massively increase. However, force strikes will deal extra damage to the overdrive gauge - 5 times more in co-op, and a whopping 10 times more in solo. Try to deal damage to the overdrive gauge as much as you can by spamming force strikes wherever possible, and take advantage of break state damage as much as possible (where his defenses will significantly reduce). Once break ends, Volk will immediately reenter overdrive.

The Blood Moon will disappear, and hence you won't need to worry about it anymore. Keep calm, and avoid getting hit. All unmarked attacks in this phase are iframable, so dodge or skill as necessary.

From now on, Volk's moves have an element of randomness.