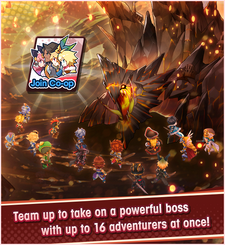 Raid Events are an event type in which players can cooperate with 3 other players' teams to take down a giant boss. Primary rewards from this event type include an exclusive 4 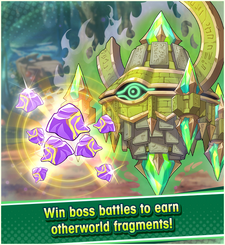 Boss battles[1] are a quest that can be attempted solo or in co-op, and act like traditional co-op quests where only 4 units total are allowed (1 per player). This tends to involve fighting a regularly-sized boss, as one might see in other quests. This quest is the primary source of

Otherworld Fragments to challenge the Raid battle, as well as 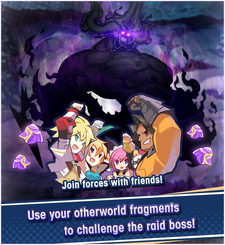 Raid battles[2] are a co-op exclusive quest where up to 16 units can participate (4 per player). This involves fighting a giant Raid boss that has multiple body parts with their own HP bars. Damage to any body part will contribute damage to the boss's overall HP, but fully depleting the HP of a part will break it, leading to more rewards and sometimes weakening the boss's attacks.

Participating in a Raid battle costs getherwings as well as

Beginner difficulty Raid battles are the primary source of

EX Raid can be accessed with

Otherworld Gems after clearing Expert. The boss will have additional attacks, and different attack patterns than in Expert.

Rewards primarily include a significantly larger amount of

Playing this mode will only cost

Otherworld Fragments or Getherwings are consumed.

Nightmare Raid[3] can be accessed after clearing EX Raid. The boss will have significantly more HP than EX Raid, and the time limit is shorter, demanding that players deal high amounts of damage quickly.

Regular drop rewards are the same as in Expert, including the chance to drop

Additionally, the first clear of Nightmare each day will award the Grand Bounty

- a random selection of 5 rewards, 1 from each of the pools listed below. Pools A through C contain rare items, while Pools D and E contain Bronze and Silver Emblems respectively.[4].

Omega Keys from Emblem collection rewards. Omega Solo has the player face the Raid boss alone, with just their own team of 4 adventurers. The boss uses similar attack patterns to Expert, EX, and Nightmare, however may differ in traits such as Condition resistance. This mode was first released at the same time as Raid Boosts, so it is balanced around having those boosts, and therefore highly recommended to bring maxed Raid Boosts into the fight. First-clear rewards tend to include

Damascus Crystal x5, and drop rewards are similar to those offered in Expert or Nightmare[6]. Successfully clearing this mode will also unlock the Omega Raid difficulty.

Omega Raid is a co-op difficulty similar to Expert, EX, and Nightmare Raid battles, but the boss has higher HP and deals more damage. Omega Raids are only available during specific times during the Raid, usually weekends. It comes in 3 difficulty levels: Level 1, Level 2[7], and Level 3[8], and drop rewards are similar to those offered in Expert or Nightmare[9].

Otherworld Fragments are a resource that can be used alongside getherwings to challenge Raid battles. They are primarily obtained as drops from boss battles.

Otherworld Gems[10] are a resource that can be used to challenge EX Raid battles. They can be obtained as drops from Expert or Nightmare Raid battles.

Omega Keys[11] are special items used to unlock Omega Solo quests. 3 keys need to be obtained to unlock the quest, and these keys can be found in Bronze, Silver, and Gold Emblem collection rewards. 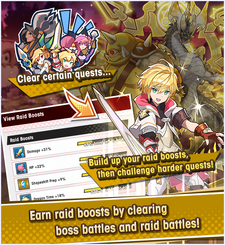 Raid Boosts[12] are passive effects to improve the player's combat performance during the Raid event. These can be earned in increments of 1-2% by clearing boss and Raid battles, and they stack up up to a set maximum amount. 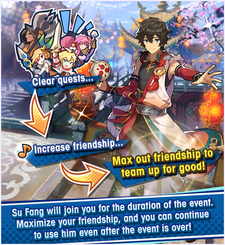 Each Raid Event includes a free Adventurer that temporarily joins the player's roster. By completing quests with this character on the team, Raid-related or otherwise, friendship points can be earned. Points earned are equal to the stamina cost for the quest cleared, but if a Raid-related quest is cleared then the points gained are doubled. Once friendship points reach their maximum, the Adventurer will permanently join the player's roster. Assuming the appropriate Mana Circle nodes have been unlocked, maxing friendship points will also make the Adventurer's story available to view. Befriending the free Adventurer will also unlock a daily endeavor to obtain a

Summon Voucher when all other daily Raid endeavors are complete[13].

This Adventurer has an element advantage over their Raid's boss, often has a Class Bane that is effective against the Raid boss, and has a maximum resistance of 50% to the main Condition that the boss inflicts.

Initially, the Adventurers provided by a Raid Event were 4

. From Timeworn Torment/May 2020 onwards, newer Adventurers are at 5

by default. While the event remains active, their Mana Circles can be unlocked with special items that are obtained from the event (e.g. Wu Kong's Conviction), greatly decreasing the cost of empowering them. 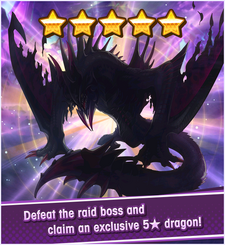 Several Raid Events include a free 5

This Dragon usually shares the same element as their Raid's boss[14]. Due to their status as free units, these Dragons will have weaker abilities and lower stats than 4

Dragons obtained from Summoning. At Max Unbound, one of these free dragons will have an ability comparable to that of a non-Unbound 4

From Timeworn Torment/May 2020 onwards, newer Raid Events have not included a Dragon.

Emblems are collectible items that can be obtained from boss and Raid battles. They cannot be spent, but instead act as a score system, with rewards available depending on the total amount of each emblem type collected. There three types of emblems: Bronze, Silver, and Gold.

Bronze Emblems can primarily be obtained from boss battles,

Silver Emblems are primarily from Beginner Raid battles, and

Gold Emblems are primarily from Expert, EX, and Nightmare Raid battles. Bronze and Silver Emblems can also appear in the daily Grand Bounty from Nightmare Raids. 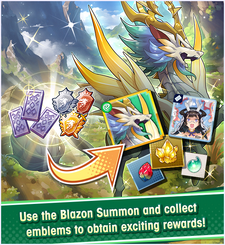 Participating in the Raid Event will award

Peregrine Blazons. These can then be used in Blazon Summons[15] to obtain a variety of rewards, including the Raid Event's free 5

Dragon, Conviction items to unlock the featured Adventurer's Mana Circles and a 4

Wyrmprint[16]. Random Wyrmprints other than the Raid-specific one can also be obtained from Blazon Summons. These prints are mostly 3

, and only one featured 5

Wyrmprint has a chance to appear. This featured print tends to have an elemental or affliction resistance relevant to the Raid's boss[17].

Blazon Summons are divided into "boxes", each containing a set amount for each type of reward. Once a reward has been obtained, it is removed from the box, and this process continues until the box is empty. Attempting to summon again will prompt the player to "reset" the box, which will make it proceed from box #1 to #2 etc, with different rewards. Boxes #1 to #4 each contain 1 copy of the free 5

Wyrmprint, while boxes #5 onwards will contain 1 copy of the Wyrmprint but will not contain a copy of the Dragon.

Boxes can be prematurely reset without emptying them by pressing the "reset" button after the Dragon copy from that box has been summoned. Resetting in this way will forfeit the unclaimed contents of the box, and proceed to the next box. This results in less rewards overall, and is only advised if one is in a rush for all copies of the Dragon specifically.

The following is a list of the in-game changes that have been made to this Event format over time: