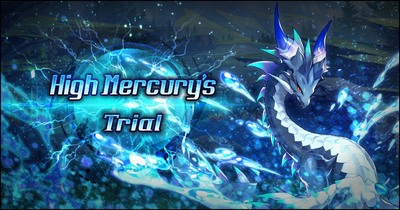 HP isn't too much of a concern, as all adventurers should be able to withstand the unavoidable damage High Mercury inflicts at the beginning of the fight if they have sufficiently strong equipment, and the fight has no further sources of unavoidable damage.

Crafting Void or Chimeratech weapons, or better, can improve your adventurer's performance (especially if it's Chimeratech) in the quest, though technically optional. Still, if possible, at least equip your adventurers with Void weapons at minimum.

Everyone should be ideally be equipped with a max-unbound 4

dragon at a minimum.

All adventurers should equip their standard wyrmprints in normal compositions.

In an auto battle composition, adventurers may see benefit from running Strength Doublebuff wyrmprints such as

Brothers in Arms or

Sisters of the Anvil for offense, and Healing Doublebuff wyrmprints such as

The Dragon Smiths or

Odd Sparrows for survivability, due to the very high frequency of defense buffs.

These units will be doing the majority of the DPS, and provide buffs/debuffs if applicable.

These units spend most of the time buffing other adventurers.

If desired, the healer keeps the team alive and provides support.

There are two general variations of compositions in High Mercury's Trial - 4DPS and 3DPS. There are also two specialty compositions involving Templar Hope that have unusual requirements and not compatible with normal co-op.

The three real requirements for general compositions are as follows:

This is the fight's initial "HP check" blast.

High Mercury will target the closest player to her and do this 3-attack combo. Once she has stomped, the direction of her dash is locked in. After the dash, she will do a wide tail swipe behind her.

High Mercury will target the farthest player and fire 2 "Water Shotgun" blasts of several balls of water. The ranged baiter should skill, dodge, or move out of the way.

High Mercury will summon whirlpools in one of 3 possible patterns, decided at random. A consistent safe spot is in the upper-left of the map, which is why it was important for the melee DPS adventurers to bait High Mercury there earlier.

Using a sticker to assign bubbles

High Mercury will summon 4 Spheres of Salvations (henceforth referred to as bubbles) that can be entered as safe zones. Standing inside a bubble will make the player invincible to all of High Mercury's attacks. However, if multiple adventurers try to enter the same bubble, then it will be destroyed. Each player should make sure to indicate which bubble "belongs" to them, whether by discussing in a pre-made room or by using the arrow stickers.

While the bubbles are up. High Mercury will perform her Stomp + Dash + Tail Swipe combo again, followed by another two set of Water Shotguns. All players should be ready to enter the bubbles before High Mercury's map-wide "Waterfall" move, which follows shortly afterwards.

Should a bubble be accidentally popped, priority should be given to damaged or

Bogged adventurers on remaining bubbles, so that they don't get killed by the next attack.

High Mercury will summon a waterfall that hits the entire map. This cannot be avoided with skill iframes, and causes severe damage. There are three methods of mitigating it:

Shortly after the Waterfall, High Mercury will target the farthest player and put them into an Aqueous Prison. The other adventurers will then need to break the prison to free the trapped player, or they will take severe damage, and it likely will be fatal if they were already damaged and did not receive healing in time.

While the ranged baiter has been farthest from High Mercury up to now, they should instead roll toward High Mercury, while the weakest DPS moves farther away to bait the prison. Once the purple attack marker appears below that player, they should roll back to the main party to be freed. The ranged baiter should return to a far distance for the next attack.

High Mercury will target the farthest player and set a Homing Bubble to follow them. The ranged baiter needs to direct this bubble away from the rest of the party - it will deal severe damage to anyone it touches and also any nearby adventurers caught in the explosion, and it cannot be avoided with skill invincibility frames. Get away from it, baiting it away from the DPS group, until it explodes on its own, or dragon tank it.

High Mercury will do her stomp + dash + tail swipe combo again, with the Homing Bubble from earlier exploding around the time of the Tail Swipe. She will follow up with another set of Water Shotguns and Whirlpools.

High Mercury will summon Spheres of Salvation again, but this time she will also summon rats that will try to destroy the bubbles.

If High Mercury is broken during any of the moves above, she will enter this loop of attacks until she is broken once more.

High Mercury will go to the center for Bursting Bubbles again, but will then cast Homing Bubble shortly afterwards, followed by a set of Water Shotguns.

High Mercury will do her usual Stomp + Dash + Tail Swipe combo towards the closest players, followed by Shotguns toward the farthest and another round of Whirlpools.

If High Mercury is broken during Loop A, she will enter Loop B. Once Loop B finishes, she will move back to doing Loop A.

High Mercury will do a similar set of moves to the Summon Help section before, but this time she throws in an Aqueous Prison.