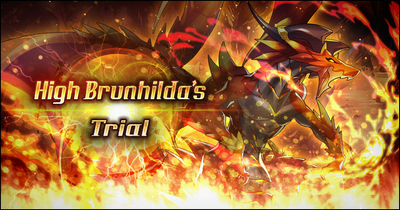 HP isn't too much of a concern for Standard difficulty, as all adventurers should be able to withstand the unavoidable damage High Brunhilda inflicts at the beginning of the fight if they have sufficiently strong equipment, and a healer was used, which is highly recommended.

See the following table for HP requirements depending on co-abilities available.

Crafting Void or Chimeratech weapons, or better, can improve your adventurer's performance (especially if it's Chimeratech) in the quest, though technically optional. Still, if possible, at least equip your adventurers with Void weapons at minimum.

High Brunhilda's Trial: Expert can still be challenging even in the face of powercreep.

A Void weapon with the High Dragon bane enabled is the bare minimum possible to clear the quest, but it's strongly suggested to at least craft a Chimeratech weapon and use that instead, or better yet, craft a High Dragon weapon with materials obtained from High Mercury's Trial: Expert, and unbind it at least four times.

The following table shows only Water-attuned weaponry. For Flame-elemental lances (specifically for

The Void Manacaster cell displays a core weapon due to the lack of a void equivalent.

Everyone should be ideally be equipped with a max-unbound 4

dragon at a minimum for Standard, and a max-unbound 5

dragon at a minimum for Expert.

Most adventurers should equip their standard wyrmprints.

Summer Celliera) have specific requirements due to their partial resist

Burn Res +50%Reduces susceptibility to burning by 50%., that has to be patched up with a

Burn Res +50%Reduces susceptibility to burning by 50%. wyrmprint such as

Pipple can make use of two

Skill Prep +50%Fills 50% of skill gauges at the start of quests. wyrmprints such as

These adventurers will be performing close-range baiting for the majority of the fight. The Elisannes can also buff the entire team, and in case of Gala Elisanne, provide some defensive support.

These units will be doing the majority of the DPS, and provide buffs/debuffs if applicable.

The healer provides defensive support and take care of any damage the adventurers may incur.

The three real requirements for general compositions are as follows:

burn which always inflict HP to 1 damage, and lasts a very long time before it wears off.

Burn Res +100%Reduces susceptibility to burning by 100%. (including these that can reach this with one

Burn Res +50%Reduces susceptibility to burning by 50%. wyrmprint, but not these that require two wyrmprints), especially in teams without burn relief healing, as High Brunhilda has unavoidable attacks that burn and also be followed up be another unavoidable attack, which can spell doom for partial- and off-resist adventurers.

This is the fight's initial "HP check" blast.

The close-range baiter should get prepared to bait High Brunhilda's next attack away from the other adventurers. Dodge rolling provides iframes that may help in preventing yourself from getting knocked back by her backdash before the attack.

After backdashing, High Brunhilda faces the closest adventurer and breathes fire in a 180-degree area, clockwise, starting from her left side. Skill or dodge.

The close-range baiter should take position afterward to bait High Brunhilda towards the top of the arena in preparation for "dive cancelling", described later.

High Brunhilda targets the furthest adventurer, and divebombs them. This attack is unavoidable within the explosion area, and deals a good amount of damage.

Crimson Inferno in Expert difficulty and below have a maximum range. If the distance is too far apart between the target and High Brunhilda, High Brunhilda will instead just turn around and perform a claw swipe.

If the long-range baiter moves away to maximize distance between themselves and High Brunhilda, it is possible to perform the cancel intentionally, and it can improve DPS as High Brunhilda will not move a large distance.

In co-op mode, these four volcanoes will appear on the adventurers' positions one by one, and also inflict burn on hit.

Either way, High Brunhilda will try to keep you busy while the above attack is ongoing.

Keep in mind that Crimson Inferno's range is cut short by any volcanoes in the path, if you decide not to perform "dive cancelling".

The close-range baiter or the substitute baiter should bait this attack away from the rest of the team. Failing that, skill or dodge the attack.

Unavoidable, strong mapwide damage that can only be blocked by having one of the volcanoes be in the path of the attack between the adventurer and High Brunhilda. Get behind a volcano and avoid excessive movement.

The close-range baiter should try to keep High Brunhilda within the general area of the volcanoes.

High Brunhilda will spawn purple chaser markers on all adventurers; these markers are significantly larger than those in other Advanced Dragon Trials or Volk's Wrath. All adventurers should spread out as far as possible (usually to their four corners, either diagonally or top/right/bottom/left), and avoid overlapping other adventurers' with their markers to minimize damage taken.

Afterwards, if playing in co-op, High Brunhilda will then spawn a red stack marker targeted on the closest adventurer.

Continue normal baiting (preferably towards a wall in preparation for the next attack).

High Brunhilda targets the closest adventurer, and spawns small meteors that hit them after a small windup that deals a strong amount of damage, and lingering on them can cause you to take damage multiple times. The close-range baiter should start moving all the way to the opposite edge of the arena to perform a "dive cancel" if desired.

High Brunhilda flies off the map, and burns a significant portion of the map with lava, which causes small, but very rapid damage to anyone that gets caught in it.

All adventurers should immediately go to the lower-right side of the map, which will become a safe zone.

Once High Brunhilda finishes painting the map with lava, the adventurer with shapeshifting ready should try to get as close as possible to High Brunhilda, while the other adventurers stay as far as possible, so that the former baits the stack attack.

High Brunhilda reverses the order of attacks for this instance. After Searing Pillar hits, all adventurers should immediately spread out to their corners for the chasers.

Continue normal baiting (preferably towards a wall in preparation for the next attack).

Similar to previous instance, but the moves High Brunhilda uses will be slightly different.

Continue normal baiting, remembering to hide behind a volcano for the four Hellfires.

High Brunhilda flies off the map, and burns nearly all of the map with lava, which causes small, but very rapid damage to anyone that gets caught in it. There are four safe zones, in each corner of the map.

Flame Chasers will then spawn - this is why splitting up was important earlier for co-op. Use healing skills to cover any accidental damage beforehand, and defensive buffs to reduce the damage taken.