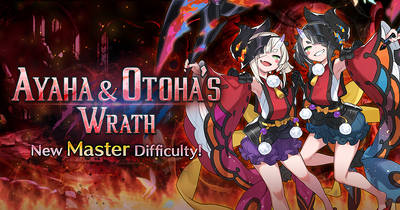 HP isn't too much of a concern, as most adventurers should be able to withstand the unavoidable damage Ayaha & Otoha inflicts throughout the fight if they came prepared with sufficiently strong equipment, and a source of freeze and a source of frostbite are available.

For Master, at a minimum, adventurers should be equipped with at least a 6

Everyone must be equipped with a max-unbound 5

All adventurers in standard compositions should equip their standard wyrmprints.

If desired, a healer can provide healing and support where needed.

In solo, a burn-resistant healer should be used, and minimize the amount of non-

Burn-resistant AI adventurers in your party, as the AI has a high tendency to get hit by attacks and may be inflicted by burn, which may make survival a serious issue. Ideally, the controlled adventurer should be a ranged unit, too, to minimize the chances of being struck by high-intensity attacks during phase 1.

In co-op, most compositions will work fine for this quest, so long as at least one adventurer can provide healing in any form, and a source of damage-over-time and disabling afflictions is available.

Warabe Asobi is a special effect that will alter Ayaha & Otoha's resistance to afflictions. The affliction resistance changes depending on the "game" (moves) they are using, but generally speaking, they will be vulnerable to afflictions while the condition is active, even if they have been previously afflicted.

In phase 1, you will be able to tell when it activates by the "Let's Play" callout.

In phase 2, the following attacks will activate Warabe Asobi:

Toryanse active, Ayaha & Otoha will gain significant amounts of damage reduction and a rapid gain of Strength, making DPS poor and survival difficult. Use afflictions to disable their effects.

Dispels ineffective in stemming the flow of buffs.

Unlike Standard and Expert difficulty, the fight does NOT open with a pair of purple-telegraphed dashes, and group baiting towards the bottom is not ideal. Depending on whether the quest is played in solo or Co-op, the first mechanic in play differs.

Skill Prep should ideally bait this as to keep adventurers with

In a solo run, this mechanic is skipped at the start of the quest, but may come up later during the first phase.

The adventurer furthest away will be trapped and have their skills drained, while a weak point is generated and a purple attack telegraphed directly towards the weak point. Destroy the weak point, after which the twins will hurt themselves and provide an opening for attack. Failing to do so will result in the trapped Adventurer being one-hit killed.

This is always the first mechanic in a solo run, and always goes after Hakkeyoi in a Co-op run.