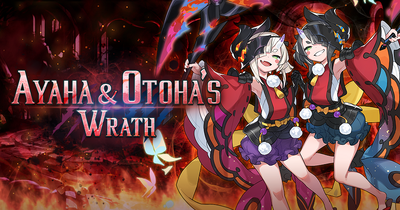 Ayaha & Otoha's Wrath: Expert is a challenge quest centered on a boss battle with Ayaha & Otoha, unlocked upon the completion of Chapter 10 and any Advanced Dragon Trial at standard difficulty, and meeting the minimum might requirement of 28,000.

HP isn't too much of a concern, as most adventurers should be able to withstand the unavoidable damage Ayaha & Otoha inflicts throughout the fight if they came prepared with sufficiently strong equipment.

For Expert, at a minimum, adventurers should be equipped with at least a 5

Chimeratech weapon; these weapons are in fact required before you're able to craft Agito weapons in the first place.

Everyone should ideally be equipped with a max-unbound 5

Note that due to general viability of adventurers in this quest, only a select few adventurers are shown in this section.

All adventurers in standard compositions should equip their standard wyrmprints.

Note that due to general viability of adventurers in this quest, only a select few adventurers are shown in this section.

If desired, a healer can provide healing and support where needed.

Most compositions will work fine for this quest, so long as at least one adventurer can provide healing in any form, and a source of damage-over-time and disabling afflictions is available.

Warabe Asobi is a special effect that will alter Ayaha & Otoha's resistance to afflictions. The affliction resistance changes depending on the "game" (moves) they are using, but generally speaking, they will be vulnerable to afflictions while the condition is active, even if they have been previously afflicted.

In phase 1, you will be able to tell when it activates by the "Let's Play" callout.

In phase 2, the following attacks will activate Warabe Asobi:

Toryanse active, Ayaha & Otoha will gain significant amounts of damage reduction and a rapid gain of Strength, making DPS poor and survival difficult. Use afflictions to disable their effects.

Dispels ineffective in stemming the flow of buffs.

The following lists moves that tend to be seen in the average run as of Update 2.3.0, which is usually 2-3 minutes. Slower runs may see additional moves that have yet to be described.

Ayaha & Otoha charge towards the furthest adventurer. The attack is unavoidable within the marker.

One of the adventurers should move further away right after START disappears so that Ayaha & Otoha are pushed up against a wall.

Ayaha & Otoha attempt to trap the furthest adventurer with a red-marked prison, and then send unavoidable damage within the purple path. Move away from the affected location.

Ayaha & Otoha charge towards four adventurers successively. Avoid lingering within marker positions and using skills might be unsafe, as you might get

Stun, and the orange beam inflicts

Burn. This attack is not avoidable within their marker, so avoid getting hit, or use a dragon skill to tank it - keeping in mind that you'll still need to continue moving to be safe.

The phase change transition animation takes a fairly long time, so this might be a good time for

High Mercury users to shapeshift and prepare to use their skills, and anyone in low HP and not receiving healing should also do so for additional safety.

This entire mechanic can be cancelled, but only with a well-timed cast of Lily's Level 4 Glacial Blossom. As Glacial Blossom's animation sets a marker on the target that doesn't follow them before actually dealing damage on a delay, the skill needs to be cast while the twins are about halfway to the middle of the room so that the marker marks somewhere close enough to hit the twins but isn't directly on top of them (if the marker is directly centered on them, chances are you are too late because the long animation won't apply the freeze before it's too late). Too soon and the marker will completely miss. Too late and Ura Omote goes through and hits you due to the large amount of end-lag. Usually, you will have to know when this mechanic takes place so the freeze can hit.

Unavoidable damage. If anyone is at low health, use a defensive buff or healing skill before it hits!

Ayaha & Otoha charge towards an adventurer. This attack can be iframed.

This butterfly inflicts severe damage and

Stun on contact. The targeted adventurer should move across Ayaha & Otoha's position, so that the butterfly strikes Ayaha & Otoha and stuns them instead.

Two purple crossed markers target a random adventurer. The adventurer should move to the top-right corner of the arena, which will maximize the size of the safe area.

Once a large purple circular attack marker spawns, the targeted adventurer should start moving towards the bottom-left corner. The crossed markers will shoot out blue and orange beams that cause rapid damage and inflict afflictions.

Soon afterwards, red butterflies will spawn, twice on each adventurer, and all adventurers should avoid lingering on their spawn points which are purple and inflict severe damage and

In co-op mode, the final blast from the giant attack marker is likely lethal.

The center of the circular attack marker also moves all adventurers towards it, making it harder to escape from it, especially if you're inside it.

Burn, and the black butterfly inflicts

If Ayaha & Otoha makes contact with the domes that the butterflies leave behind, they will also be inflicted with these afflictions.

Two red butterflies spawn on two adventurers. After a certain period of time, these butterflies will spawn purple attacks where the adventurers are, and inflict severe damage and

Ayaha & Otoha will charge towards four adventurers in a row.

The Quad Karina cheese is dependent on a build outlined in the Wyrmprints Section of this guide. Every Karina must also be equipped with at least one of the following Shared Skills: Sparrow's Guard, Knight's Spirit, Sweet Protection, Mercenary Guard, Rowdy Rumbler (the provided shield may interfere with taking enough damage to get out of dragon form) as well as a second Shared Skill from the previous list or one of the following: Tropical Breeze, Majestic Tide, Ocean Fury, Sunny Flash.

Group bait to the bottom left of the arena, as to keep both twins together. Once there, cast any party-wide defense buffs before rolling out of the strike zone.

Whoever got targeted should dodge-roll to safety. All four players should cast Black Flag followed by Raging Tide. Phase 1 should be over.

Before phase 2 even begins, at least 1 but no more than 2 Karinas equipped with Gabhine and Creidne should shapeshift.

Shapeshifted Gabhine and Creidnes should use their skill as the damage should knock them out of dragon form (this is why you do not want Rowdy Rumbler's shield). Get inside of the buff zones, and just spam your skills. Order doesn't really matter because you get so much SP from the zones.

Avoid the cage marker at all costs, even if it means getting out of the buff zone. While you certainly will survive thanks to the doublebuffs, you are not DPS-ing if you are stuck! Once safe from the attack, continue to spam skills as usual.

Dodge/Iframe the marker, follow the boss and continue attacking it, using skills as soon as they come up. If there are any Gabhine and Creidnes who have yet to shapeshift, they should do so to provide an SP fill zone.

Happens only in very slow runs. Shapeshifted Gabhine and Creidnes should use it to get out of dragon form. Otherwise, spam skills as usual and Iframe the swipes with a roll if needed.

Continue to attack the boss as usual, but do not use a skill right before it hits or it will get canceled. Once it hits, continue to DPS as usual.

Deal with the attack as usual if it pops up. It is very possible you have Broken the boss at this point, at which the run will be over as you should have more than enough DPS to kill in a Break phase. Aside from dealing with the attack in the usual way, if the adventurer targeted by the cross beams has Gabhine and Creidne equipped AND has a shapeshift immediately availiable, they should delibrately get targeted and stand in the big circle (but NOT the cross beams) until the circle is almost full and dragonform about to expire, at which point they use their dragon skill to Iframe the rest. Pulled off correctly and there will be a buff zone where the nearly broken boss is leading to subsequent break and close-out of the fight.